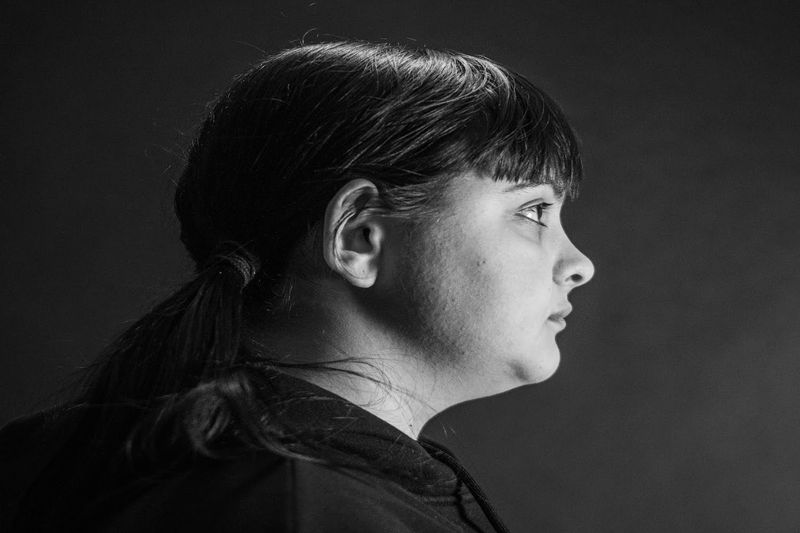 Like a majority of people, I was taught as a child what words to use to describe someone and how to use them. Words like “man,” “woman,” “mom,” and “dad”: I knew what they meant, but not what was expected from them. I had problems finding a definition for what I believed to be womanhood, despite being told I was growing toward it. As I got older, I noticed the expectations that were put in place for women. It always came back to what others thought of you and how you looked. Trying my hardest to follow those unwritten rules, I felt parts of myself being hidden and chipped away at. I didn’t like being recognized as a woman only for the moments I dressed up and acted the part. Womanhood was a performance, and I was begging that something terrible would happen to me so my understudy could perform better than I ever could. But in performance, I found it opened just as many doors as it slammed shut. Film and theater became passions of mine, and so was discussion on their meanings. While it was second nature to recognize a plot device and expert cinematography, I always felt that same nagging uncertainty of character.

I found myself in the position of director for a short film and theater production near the end of my high school career. It was an experience I always cherished, not just for the practice and a nice looking portfolio, but also because it allowed me to finally grasp what I was searching for. I found ways to challenge and break down what character was, force a camera or spotlight into the face of something others refused to look in the eye. I could express what my experiences were like and reach a solidarity with the other women working with the production — Show what heartbreak, societal standards, family, and ambition meant for me. Man, woman, mom, dad, it all melted into a singularity that in the end didn't ever go by those rules and expectations. All that mattered was the ease of someone's pose and the tone in which they shared a story: entertainment for the sake of not just others but for themselves. It wasn't a performance, it was a state of being.

With the curtains closed and every camera turned off, something I came to expect was question after question from women like myself about what it was like being in such a powerful position as opposed to acting. I knew then what it meant. Being asked countless times if I truly knew the risk. That whether I liked it or not others would cast judgement on me. I knew that my authority would be questioned, and I knew the words that came from my mouth and translated onto the screen could be twisted. I knew the risk of being a woman fully well. And I intended to take it.

In the present day, this same question doesn't stump me as it used to. The expectations that were placed on me since birth didn't make me who I am; they showed me who I was not. I found ways to share my story and my experience without even having to use words, painting moving pictures of my life. It was something beautiful and thrilling. Any fear or shame that came with feeling the need to be someone else for the sake of others was channeled into ambition. It became my drive and my power. The idea that someone could feel threatened or intimidated by my success and contentment gave me my answer. Being a woman is not living in fear of the risk; being a woman is being the risk that is feared.

© Andrea Coussens . All rights reserved. If you are interested in quoting this story, contact the national team and we can put you in touch with the author’s teacher.