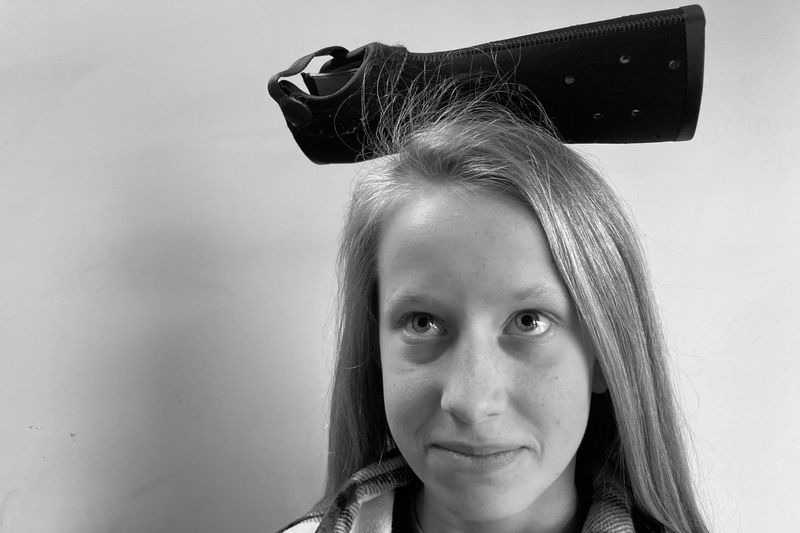 I got the soccer ball at my feet, and the next thing I knew I was on the ground. As I fell back I could hear a crack. At first, I thought it was my hands cracking, but I shortly realized it was my wrist. I was standing up and I could feel this pain all the way up my left arm. I knew something was not right. My arm was purple and blue, puffy and bent in half. My coach came over and asked if I was okay; I said yes and he took me to the athletic trainer. He taped it, but my arm still hurt really bad. Then they told me to go find my mom. As I walked out to her I held my arm in my other hand not crying at all.

As soon as my mom looked at it she knew it was broken, so she took me quickly to the doctor right next door to have it looked at. They took X-rays and found out I snapped my radius right in half. As we were waiting for the X-rays to come in they were telling us that if I broke it just right I would have to go into emergency surgery. Luckily for us, I just had to wear a cast, and then change into an EXOS brace while the bone was healing. The cast was to correct the bone so they aligned, and the brace was to hold it in place while the bone connected itself again. All I could think about was how I would be out for around a month and when I came back playing soccer would never be the same.

The whole process took about a month and a half to overcome. Some days were harder than others, and some nights I could not sleep knowing I would not be the same as before. With the help of the doctors, teammates, coaches, and family I am better than before. Even though I can’t bend my left wrist as much as I used to, it’s at least better than being in a cast.

When we went to my checkups to see how well healing was coming along, the PA was the one to take off the cast and put on my brace. We had to go back many times to get X-rays. They said it was healing quicker than expected, but I did not get out of the brace any sooner. She insisted that I leave the brace on a little longer. At this point, I was halfway through fifth grade, and at first, everyone thought it was just a joke and I was faking it.

During soccer practice, I had to stand on the sidelines and watch. It was hard, but I got through it. Around two weeks later the girls had a tournament in Wisconsin, so training was tough. The PA said that I was going to be able to play those games if the next X-rays looked good. Turns out I got cleared to play in the tournament with my EXOS brace on! I was so excited but I had not had any training in over a month and a half. I was scared but I knew if I focused and worked hard I could get to where I was before.

The next thing I knew the coach put me in to start. I was so nervous. On top of that, it was ninety degrees outside! The first half of the game was hard, my head was not in the right place. During halftime, the coach reassured me that I would do great even though I had to adapt to playing with the brace.

The next play the wind was at our backs and I had a bad shot on goal but the keeper dropped the ball and the wind blew it in! I was so excited, after that I got the ball dribbling down the wing, got around the defender, and had an amazing cross for a goal. Unfortunately, we did not score but it was like I never took a break. I was having so much fun with the girls and my coaches.

That showed me never to give up no matter how hard it is.

© Haley Rutten. All rights reserved. If you are interested in quoting this story, contact the national team and we can put you in touch with the author’s teacher.